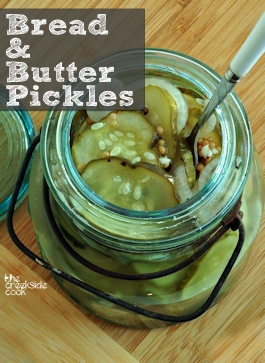 I am a reformed woman. I used to be a hater. An avowed hater. But not anymore – I changed my tune, I switched horses in mid-stream, I turned over a new leaf. I can admit when I have been wrong, and I was SO wrong about this. What, you might ask is all of this drama about? It was Bread and Butter Pickles that I disliked – I would have said hated, my feelings were so strong, but that is all behind me now. I will love these until the day I die, and I vow to make them as often as I can and I’m certain now that I will consume an uncivilized number of them every time I do.

What engendered my previous attitude? I’m afraid it was a family thing. My Mom and Grandmother always made bread and butter pickles. And though both are often cited on my blog as being an inspirational force behind my love of creating delicious food, when it came to bread and butter pickles, well, I just could not bring myself to eat those pickles. They were SO sweet, and a bit limp and one note, with little subtlety. I know I didn’t have a lot company in my hatred of B&Bs. There are just too many of them for sale in the store, and too many recipes online for my view of them to be one held by anything approaching the majority. But then I was never a fan of any sweet pickles at all. Dill pickles are my first love, and one of my promises to myself as a kid, was that when I grew up, I could eat as many dill pickles as I liked. I’ve not broken that promise to myself either – one of the most often viewed recipes on this blog is the one for my Refrigerator Garlic Dills, a recipe I make numerous times each summer.

Then, last winter, we went to one of our favorite restaurants, Maxie’s Supper Club in Ithaca, and for once, I tried their bread and butter pickles. I was like “hey-wait-a-minute!” – these don’t taste like the bread and butter pickles I’ve had before! These are…….um, good! I liked them so well, that I asked the waiter for more, which he brought right out. In fact, he brought me some to take home too. He also gave me the manager’s card, because I was already contemplating making some of these little darlings myself, and if I could not replicate them to my satisfaction, I was ready to play the food-blogger card, and ask for the recipe.

But, that turned out not to be necessary, because I found a number of references to them online, and realized quickly that not canning them was essential to having them come out crisp and fresh tasting. Still – the recipes online looked a little too sweet, and lacked one ingredient that I am pretty sure Maxie’s version has. Garlic. You gotta have garlic. It is the perfect contrast to the sweetness, and gives them a more deeply savory flavor to balance out the sugar. If you are thinking that garlic and sugar aren’t a good combination, just trust me, and make a batch of these – heck, make a half a batch if you are really skeptical – you’ll be back for the other half! I fiddled around with the proportions before settling on this combo, but go by what you think you will like – as I mentioned, most recipes have more sugar than this one does. I would suggest you give my version a try, even if you like the sweeter ones, because I think you will find that less sugar gives the other flavors a chance to shine. 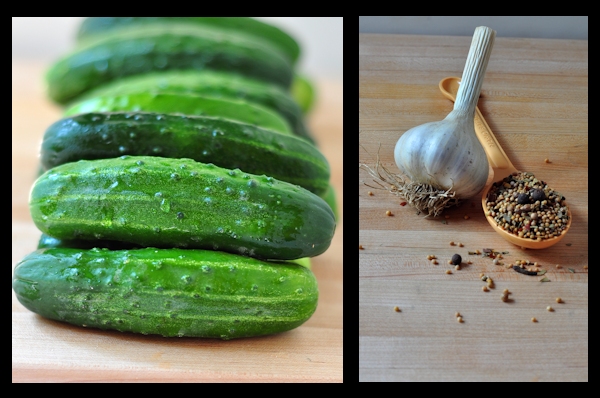 These are also very easy to make, and if you make them in the morning, they will already be a little pickle-y by dinner time. It is crucial to make time for the soaking in ice and salt part – that sets you up for success and success in this case, is a nice crunchy pickle. The one thing I did like about my Mom making them when I was a kid, was snitching the cucumber slices from the bowl – ice cold, salty cucumbers – yum! 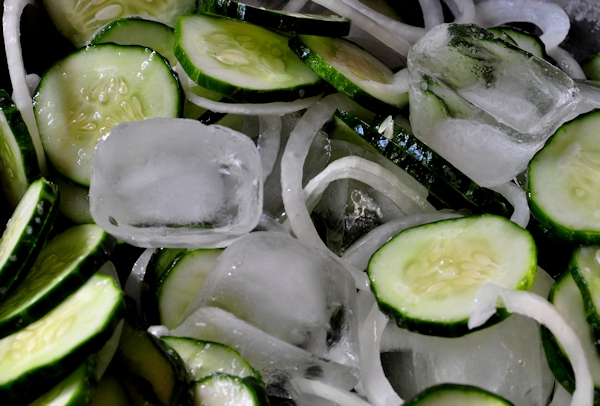 Save Print
Bread and Butter Pickles 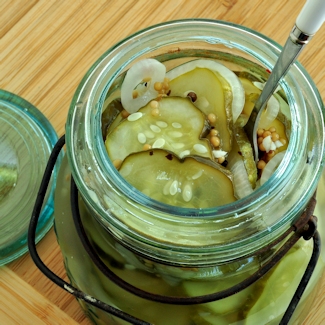 My newest obsession – soon to be yours as well, I hope: 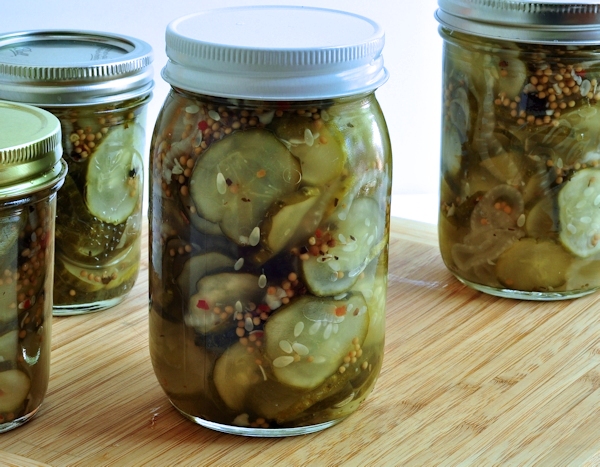 Now, I can help but wonder how they will be with a little bit of jalapeno in them…or maybe a whole lot of jalapenos…

22 thoughts on “Bread and Butter Pickles”