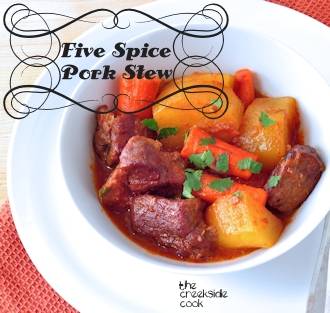 There can definitely be a huge downside to being a food blogger. When you have to write a blog post about a recipe that turned out particularly well, like this Five Spice Pork Stew, but the last batch you made is gone already? It’s a sad thing, let me tell you.

Fortunately, this dish is particularly easy to make, and doesn’t require any difficult to find ingredients. If you have never used Chinese Five Spice before, you might think it will be hard to lay your hands on some, but that is not the case. A lot of supermarkets carry it these days, and if yours doesn’t, then look for it online – there are tons of places that carry it, and it’s not at all expensive. I got mine at Great American Spice Company [I do blog for them sometimes, but I’ve been buying their five spice for years]. I suppose each company has it’s own exact formula, but they usually contain a mixture of cinnamon, fennel, cloves, star anise and white pepper. I have seen other mixtures, but I think this is the most common one. It goes really well with pork, and gives this stew a rich background flavor that is almost indefinable, but is intensely satisfying.

This truly is an accidental recipe, because the first time I made it, Five Spice Powder ended up in here only because the color so closely resembles cumin and I was in a hurry. By the time my nose told me it wasn’t cumin, it was already mixed in, and there was no going back. Right from the start, I knew it was the good kind of accident that happens sometimes, because it smelled so amazing while it was cooking. Making it again was definitely on purpose, and it has since found a secure spot in our dinner rotation. 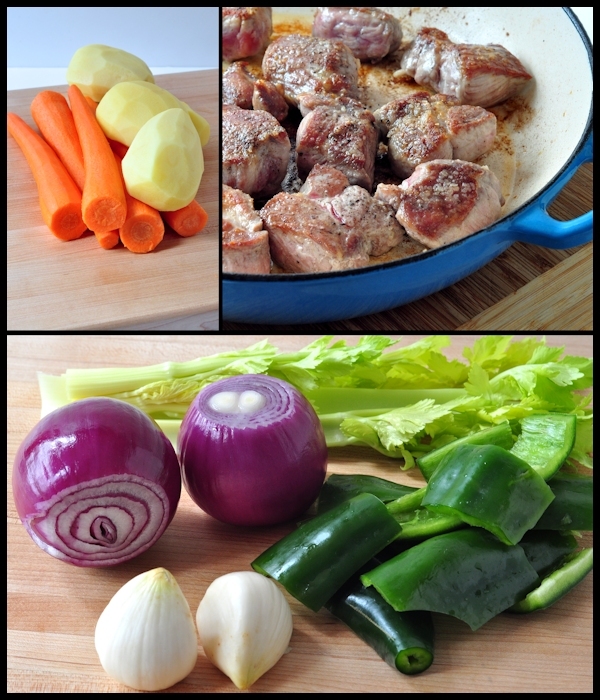 The pork I use in this comes from the shoulder – the same cut you might use for pulled pork, but in a bit more accessible form. In most parts of the country, you can buy “Country Ribs”, which are really just pork steaks cut in half the long way. You don’t have to deal with a huge hunk of meat that way, and it is usually cheaper per pound than buying a whole pork shoulder. They used to be sold as pork steaks, so you might find them that way too. Don’t use the loin or regular pork chops, because they will get tough and dry – you need that darker meat, with a bit of fat marbled through it. 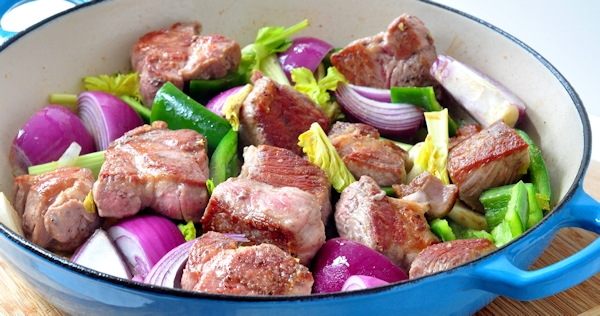 I use my enamel over cast iron brazier pan to cook this in – a most useful item. I’m not sure how I once lived without it to be honest – I use it a lot for all sorts of things. Mine is similar to this one

, though I think I got mine at a thrift store maybe. A 12 inch cast iron skillet with a lid would work as well [yeah, I know they say not to cook tomatoes in them, but I do it all the time – just make sure it is well dried and oiled afterward], or a roasting pan.

Save Print
Five Spice Pork Stew
Leave plenty of time for this to simmer away in the oven - that is the secret to having juicy, tender chunks of meat in this stew. 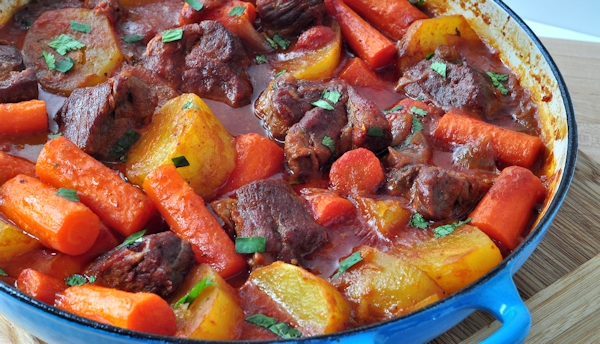 It is perfect for these chilly evenings we are still having – and because you can leave it braising in the oven while you are out weeding the garden and getting some other spring chores done. 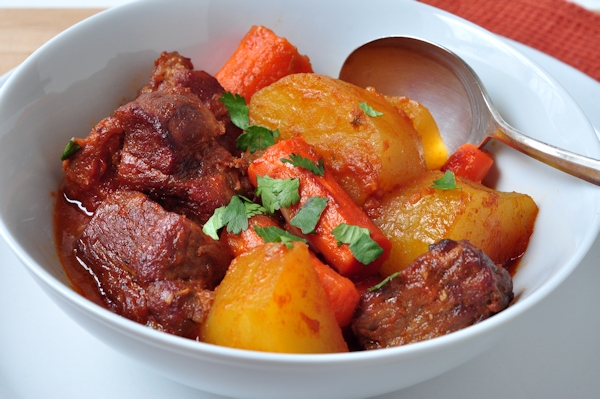