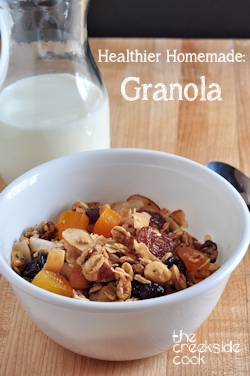 Making granola, like making yogurt or tofu, was practically required for the Mother Earth News reading, funny cigarette smoking, barefoot live off the land types that we once were. I never bought granola back then, mostly because it was more expensive than making your own. Even the stuff in the co-op or health food store didn’t compare in either price or flavor to what I could make myself.

Unfortunately, my old recipe had an unbelievable amount of oil, making it very high in fat, and as we get older, we don’t burn off fat as well as we once did, so I stopped making it. I tried a couple different store bought low fat kinds but they mostly tasted like cinnamon infused cardboard. Reading the ingredient list is even less appetizing. Even if you had a wicked case of the munchies, you don’t want to eat that junk.

Then I ran across Nigella Lawson’s recipe which uses applesauce instead of quite so much oil, lowering the fat content somewhat and still tasting amazing.

I have to admit that I am not always so crazy about the results of substituting applesauce for fat in recipes – I understand wanting to find an easier-on-the-hips way to make brownies or what have you, but I am rarely a fan of the result. In this case though, I actually think it tastes better and I can’t imagine going back to my old recipe.

And now, there are so many more easily accessible ingredients for granola making – I used a mixture of rolled oats, barley flakes and wheat flakes, as well as adding some quinoa flakes for the increased protein. Quinoa flakes have a bit of a vegetable-y quality about them normally, but in here they just kind of disappear into the mix so that you can’t really taste it much, but you still get that all important protein boost at breakfast time.

I added some of my favorite seeds too – golden flax, chia and sesame – each brings a unique bit of nutrition, fiber and flavor along. Coconut oil and unsweetened coconut chips both get added in for flavor and because they are good for you.

Use whatever dried fruit you enjoy, keeping mind that dried fruit is pretty high in sugars, albeit natural ones, but that they also add to the fiber count, not to mention a huge flavor boost and a little additional sweetness. 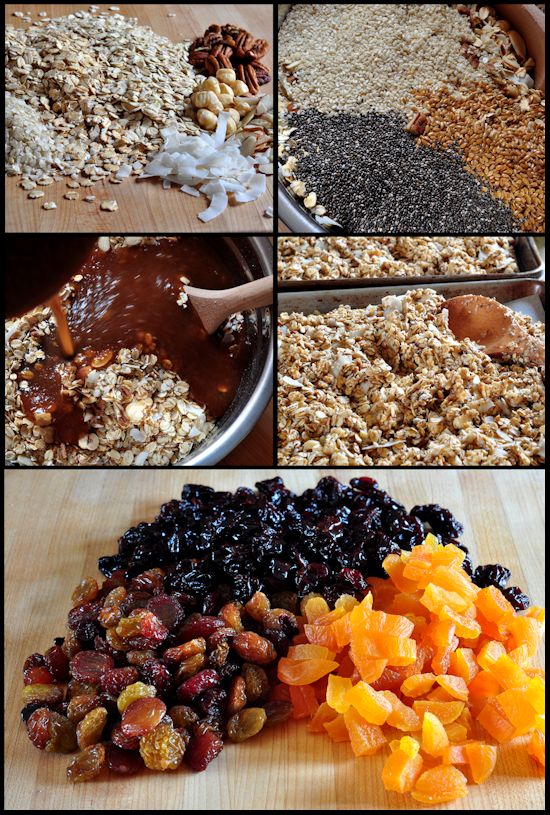 I’ll admit, this takes a little more effort than opening a box from the supermarket, but I think you will agree that the result will be worth the bother. So, we better get going! 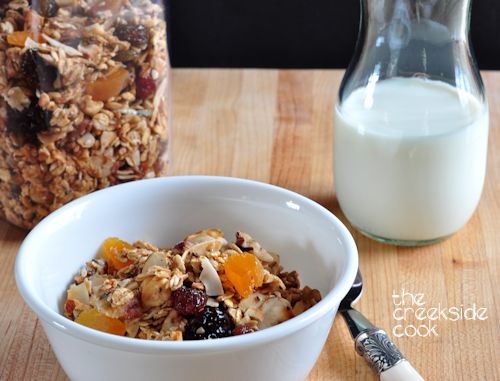 Don’t cook the fruit – just add it after you remove the granola from the oven – it will get melded into the cereal without getting dried out and hard. 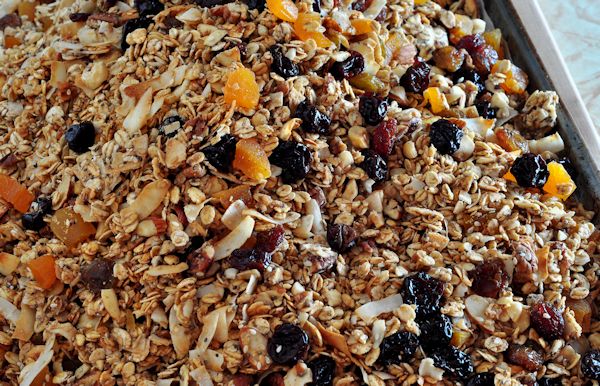 You can enjoy this granola on yogurt, straight out of the container, or my favorite – in a bowl with milk – yum! A copy of Mother Earth News propped up in front of you is optional, but not a bad idea. 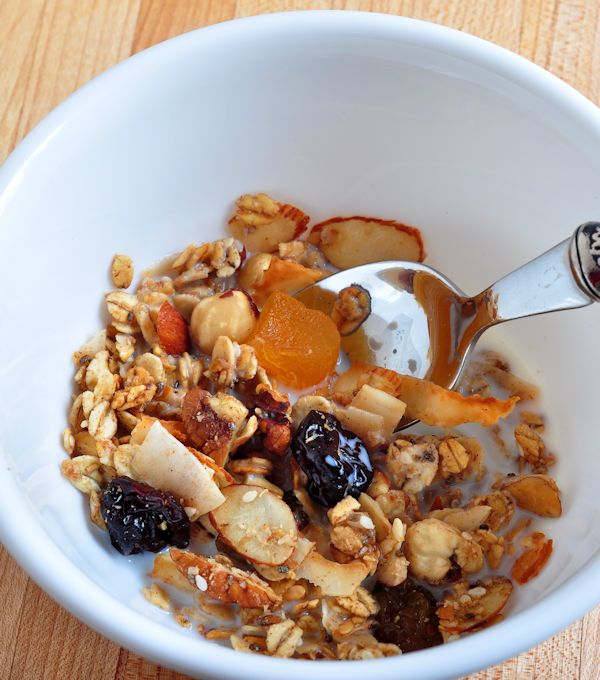