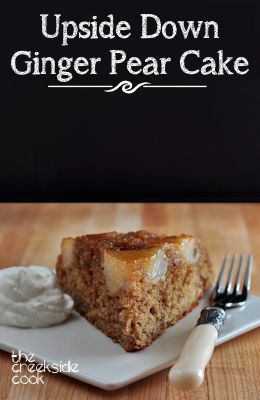 This post isn’t just a recipe. It’s also an ode to my favorite cast iron skillet.

Larry and Ellyn gave it to me for my birthday in 1981, before Lauren was even born. He got it at the local hardware store, and I think he paid something like 8 dollars for it. I can still remember how excited Ellyn was when I was ripping off the wrapping paper.

As do most kids, she loved giving presents and being part of the surprise. Though, only a few months earlier, she had over the course of a couple days, told me all my Christmas presents, because Larry let her watch while he wrapped them. The highlight of that Christmas was a copy of “Joy of Cooking”. Obviously he was setting himself up for a lifetime of good meals. Which I am pretty sure he would agree, he has enjoyed. He is my chief taste tester after all. And, Ellyn got better at keeping secrets after that.

But – back to the cast iron skillet. When he gave it to me, it fit in perfectly with the long haired hippie, Mother Earth News*, live off the land thing we had going. It was an essential bit of gear, and I swear I cooked most of our meals in it for years. We kind of got away from that lifestyle for awhile, but the skillet stayed. Now, we are back to trying to raise more of our own food, and if not exactly living off the land, we are getting closer. And though my kitchen is far more well-equipped than it was in 1981, I still use this pan a few times every week. It has some company now – a bigger skillet, a griddle, and a number of porcelain-over-cast iron pots, but it remains my favorite.

If you don’t have a cast iron skillet of your own, the first thing you should do is go and buy one immediately. Check out the selection on Amazon: Cast Iron on Amazon.com. When the world is coming to an end, you are going to want one – no matter the apocalyptic circumstances, you will still be able to throw together a tasty meal if you have a cast iron skillet. And I don’t know about you, but I don’t intend to let such events keep me from cooking something delicious – I’ll be prepared with my trusty skillet. 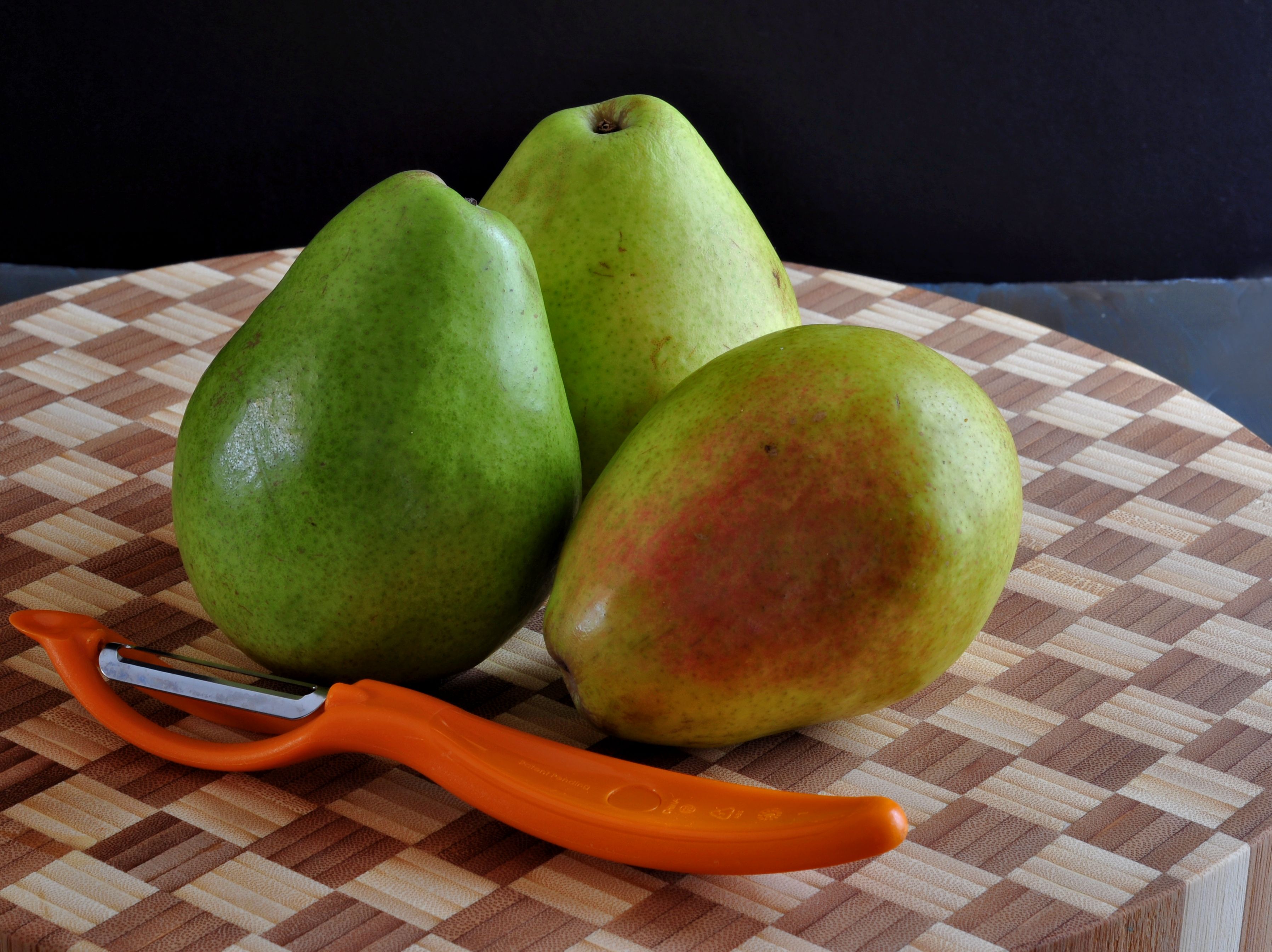 Still – buying one now won’t help you with this cake, because a new cast iron pan will not have the patina to prevent things from sticking, so in the notes of the recipe, I have included instructions on how to bake this in a 8 x 8 inch pan. If you have a nicely seasoned iron skillet already, you are all set – and I hope that you do, because this cake is definitely best in a skillet. 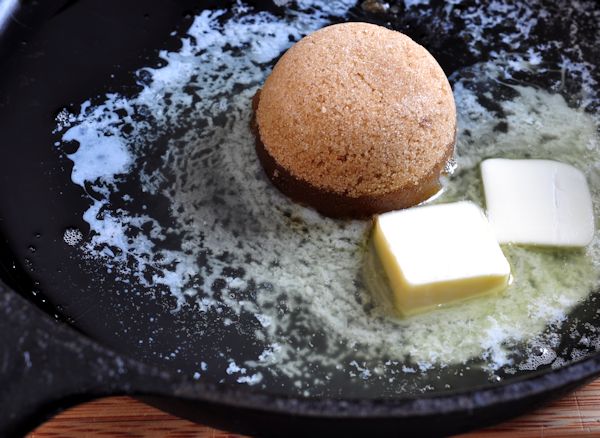 And if not, it is still very good, and well worth making, so don’t let that stop you.

Save Print
Upside Down Pear Cake 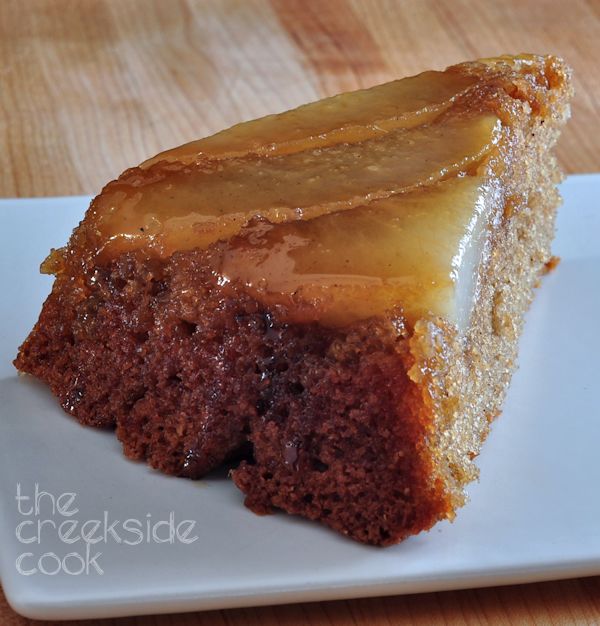 Author: Donalyn Ketchum
Recipe type: Cake
Serves: 8
Prep time:  20 mins
Cook time:  30 mins
Total time:  50 mins
Ingredients
Prepare the Fruit
Prepare the cake
Instructions
Notes
If you don't have an iron skillet, you can still make this cake. Just make the pear topping in a regular skillet, and transfer it to a well buttered 8 x 8 inch pan before you cover it with the cake batter. It will take slightly longer to bake this way - 40 minutes or a bit more.
3.2.2429
Look at that – the edges get a sort of chewy-crisp thing happening. 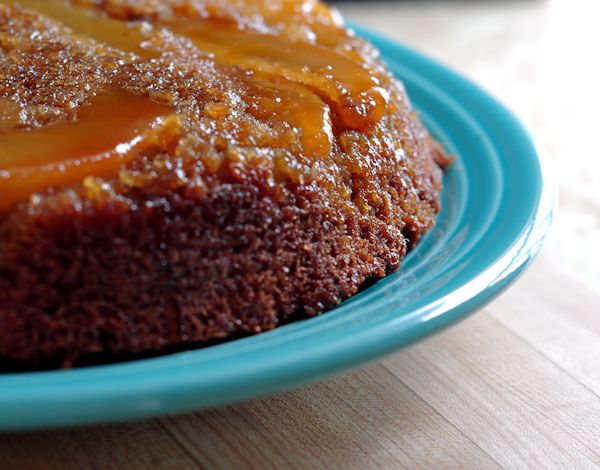 It looks so pretty on the plate. 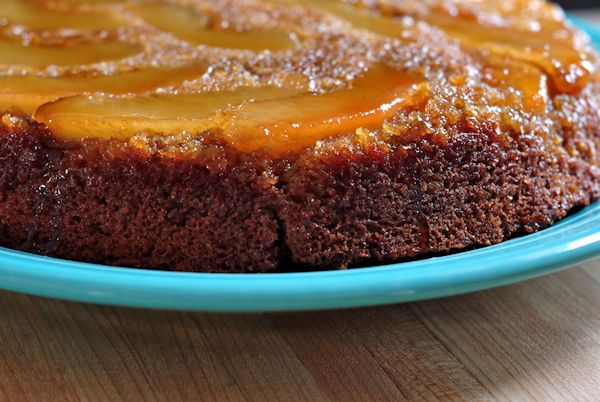 And prettiest of all on your plate! 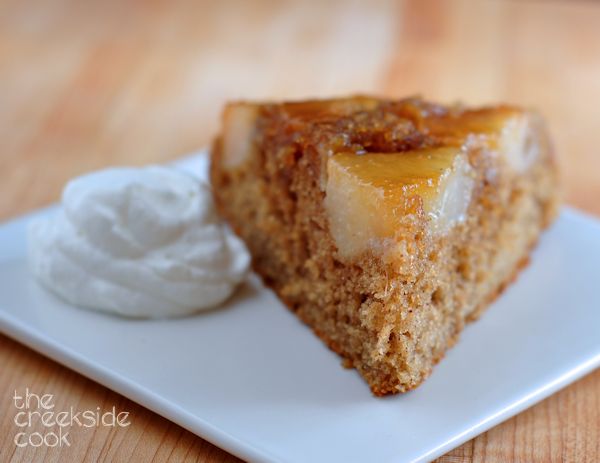 *And yes, we still read Mother Earth News – it goes really nicely with a slice of juicy, sweet and spicy pear cake!