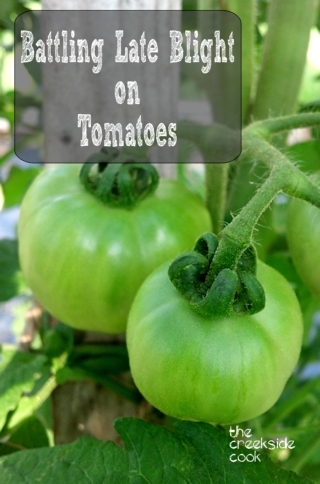 I’m going to talk about the gardening side of things today and focus on the idea of preventing late blight on tomatoes. If you aren’t a gardener, or never plan on being one, you can just click on the recipe index up above, and I’m sure that you will find something to tickle your fancy for now. I’ll be back with something delicious to eat in a day or two, I promise!

Late blight is a fungal infection that affects plants in the nightshade family, most often tomatoes, followed by potatoes, and to a lesser degree things like peppers and egglant. Every gardener along the eastern seaboard shudders when they remember the summer of 2009, which was a legendary year for late blight. It began showing up in our area in about the middle of June and by the middle of July, it was everywhere. We lost every single one of our tomato plants that year, and if you hang around here very much, you know how devastating that was to us.

Had we ever had late blight prior to 2009? Yes, but it was, as the name suggests, late, occurring in September, when we had already harvested tons of tomatoes, not in July when they were just beginning to ripen. The problem was so widespread in 2009, that I don’t know if we could have prevented it in our garden, no matter what we did, but in the years since, we have educated ourselves in measures that will help protect our plants – measures that anyone can take to have at least have a fighting chance of preventing it.

And prevention is the only way to fight it, because once you already have the pathogen on your plants, there is no getting rid of it. If you see late blight on one of your plants, your only hope is to pull up that plant and pray the rest of them aren’t already infected too. The folks at Garden Shoes Online carry some products that we use in fighting late blight, and they are going to help one of my readers fight it too – more details about that below.

I’m going to give you some proven strategies for keeping this disease out of your garden, but first I know you probably want to know what it looks like, right? I can’t find any photos of my own that show it – when you have to pull up all of your tomato plants and destroy them, you aren’t really in the mood to document it – at least we weren’t. So, check out this link, from Cornell University, which has tons of gory photos of late blight on tomato plants.

These are some nice, healthy Early Girl tomatoes growing in our garden this year. 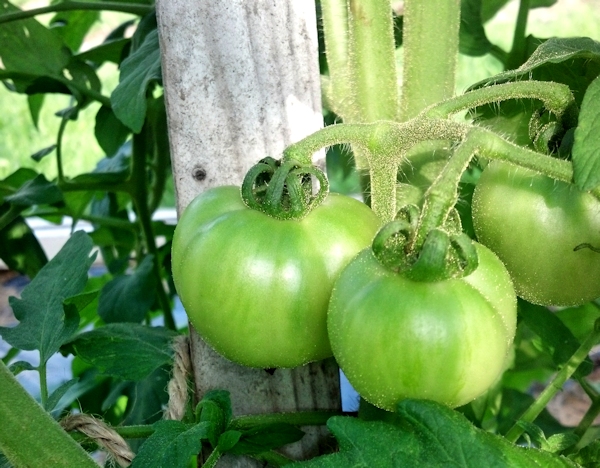 For a home gardener – especially an organic gardener, here are some important strategies that will minimize your risk.

1. Never plant your nightshade family plants where there have been nightshade plants growing in the previous 3 seasons. This is a good rule of thumb for everything, really – and not just because of disease. Different plants use different nutrients from the soil, and planting the same thing in the same place year after year will deplete your soil of what those plants need to grow well. For our purposes though, though late blight is not carried in the soil specifically, it is carried on plant tissue, and even if you are diligent about cleaning up the debris from one year to the next, you can miss things, and it doesn’t take a lot of the spores to get an infection started.

2. Grow disease resistant varieties, and if possible, start your own seeds. In 2009, a lot of people brought late blight home to their gardens by buying plants from the big box stores or other plant nurseries that became infected. Starting your own seeds is not that hard, and not terribly expensive to get set up either: How to start garden seeds. We don’t grow a lot of heirloom varieties, because they aren’t as resistant as some hybrids. What you grow is up to you, but at the beginning of the season it is a good idea to check that same Cornell page on late blight to see what they are recommending as being resistant. Our two “workhorse” plants are Juliet grape tomatoes, which are really more of a plum type, and Early Girls. Our growing season here is not long, so we need short season plants that are going to make lots of tomatoes in a hurry. However, in 2009, none of either of these survived, so nothing is certain. 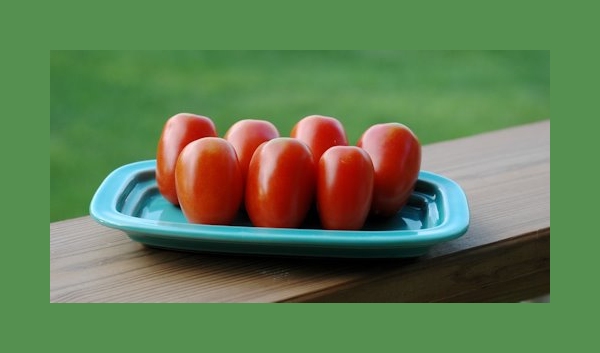 3. Keep things neat. Tie up your plants with stakes, rather than letting them sprawl on the ground and get tangled with the foliage from other plants. This is also going to help with air circulation, a key preventative factor in all kinds of fungal and other sorts of nasties that want to get a foothold in your garden. Such things thrive in a moist atmosphere plus every place your plants touch the ground makes a potential pathway for pathogens. So get them up off the ground. 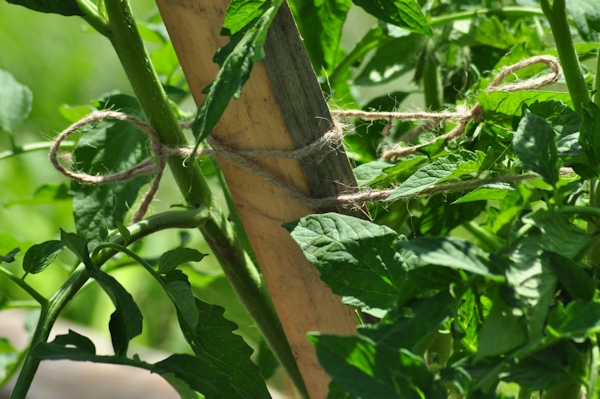 4. Grow on black plastic. I know this doesn’t seem very “green”, but if lots of tomatoes are your goal, then growing on plastic makes sense. We used to mulch with layers of newspaper and cardboard, covered by straw or hay, but once we tried growing on plastic instead, the results were so impressive, that we will never go back. Specifically for late blight, plastic creates a impenetrable barrier which keeps the spores off your plants. Yes, there is still going to be a place where the hole for the plant to grow will allow them through, but that is a lot less chance of infection than the rain bouncing spores up, every which way around your plants. In addition, growing on plastic actually makes stronger, healthier plants, which are better able to fight off disease and predators.

This is our experience, and I know that some organic gardeners are vehemently opposed to growing on plastic. We store our plastic under cover in the winter, and reuse it for several seasons. Even when it is too shot to grow on anymore, we find ways to use it even further [solarization, keeping the compost pile hot and not too wet, etc]. We resisted it for a long time, but we are working on some degree of food independence here, so we have to go with what works. Plastic is the best weed suppression, it holds moisture in the soil, it keeps the ground nice and warm and because the plants show up well against it, it’s easy to spot problems. As with all things, your mileage may vary, and you should do what feels best to you. 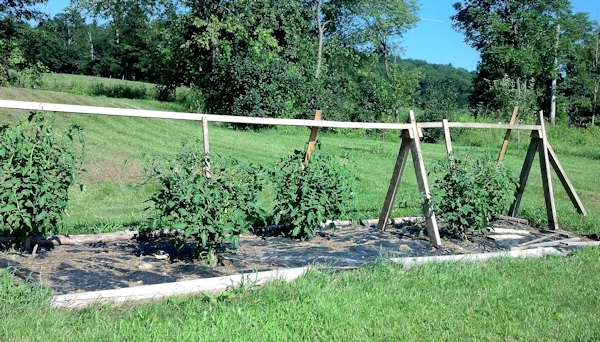 These plants show good practices – planted where no night shades have been grown before, staked up, plenty of room around them, growing on plastic, disease resistant varieties.

5. Follow good husbandry practices. Use quality fertilizers, keep the weeds at bay, trim back your tomato plants if they get too wild, and trim off the suckers so that the plant is concentrating on making a good crop of tomatoes. Remove all plant material from the garden in the fall and if there is any sign of disease on it at all, do not compost it, unless you are certain your compost pile gets hot enough to kill pathogens.

6. Finally, let’s talk about prevention of fungal diseases with a good spraying program. This is where Garden Shoes Online comes in. You might know from my previous work with Garden Shoes, that their blogger, Teresa Soule, is a personal friend of mine. She actually gave me some Green Cure to try a few years ago, and it has been a part of our prevention arsenal ever since. They also gave me the container of Green Cure below and a pretty sweet sprayer that we really like. 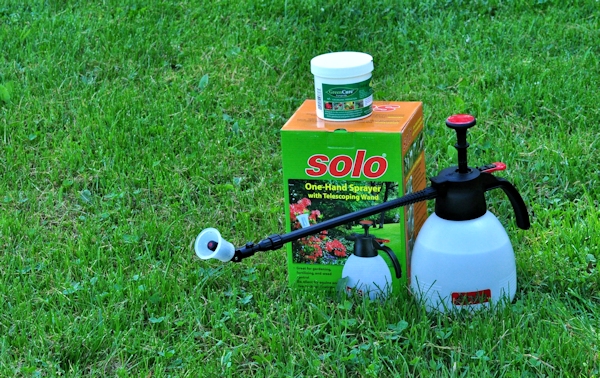 There are non-organic ways to battle late blight, but I am not sure they would work any better than the organic methods that we use now. Remember – you have to prevent late blight from infecting your plants, because once you have it, nothing I know of will get rid of it. So, every 5 to 7 days, we spray all of our tomatoes, peppers and potatoes with a rotating program of sprays. We alternate between Green Cure and a product from Gardens Alive, called Soap Shield, a flowable copper that breaks down into fatty acids in the soil. If we get a hard rain, we do an additional spray of Green Cure. It’s important, when you spray, to make sure you get the undersides of all the leaves as well, which is why the sprayer the Garden Shoes online sent me is so cool – it has an extendable wand and the nozzle can be pointed upside down to reach all areas of the plant. Both of these products prevent fungus spores from taking hold on your plants – I am sure there are more technical ways to explain that, but this is enough information for me, and most likely for you as well. 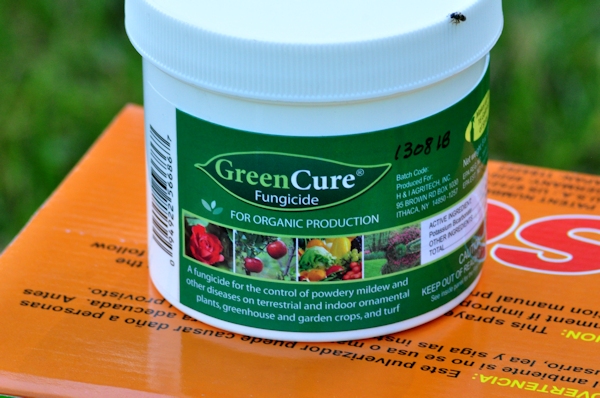 We use Green Cure on other plants too. It helps keep the mildewy stuff off the squashes and cucumbers – stuff which is almost always certain to show up on our plants in a hot damp summer like this one has been. There are some flowers that benefit from a shot of Green Cure every now and then too – Monarda and tall Phlox are both prone to mildews and it works for a lot of fungal rose diseases as well.

As a gift to one of my lucky readers, Garden Shoes online will send you an 8 ounce container of Green Cure, and that very cool sprayer. Contest is limited to readers in the US only, and since this is a specific prize, not a gift card, I hope if you enter, you’ll be able to use the prize, or give it to someone who will.

~The giveaway has concluded. Thanks for participating! ~