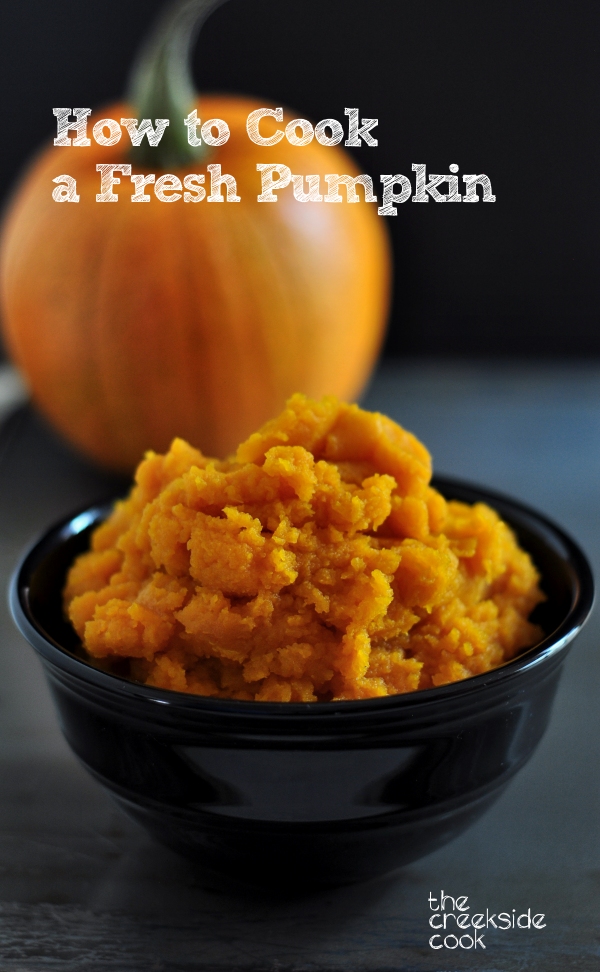 October is always SO busy for us. We become slaves to the garden and the freezer and canner – have to get all that fresh produce taken care of, before it goes bad! It makes for a lot of very tasty eating over the winter months, but there are days when I ask myself just who had the bright idea of planting an extra half dozen tomato plants in the spring, anyway?

On the other hand, it is awfully nice to look around on a January morning, and find that we have all I need to make a great dinner – right down to the dessert. Which is where this pumpkin comes in. I will have enough pumpkin put up for a couple dozen pies, or loaves of bread, or batches of whoopie pies, or even brownies.

But first, we have to get it cooked, which is something I have known how to do since I was a kid, watching my Mom and grandmother cook fresh pumpkins. But not everyone has that kind of cooking in their background – in the past week alone I’ve heard from 3 readers, asking me how the heck you cook a fresh pumpkin.

So, today that is what we are going to do. I have to get all of these pumpkins cooked up anyway, so I may as well let you join the fun, and turn it into a blog post.

You have to begin by choosing the proper sort of pumpkin, if you can. Now, you actually can cook with any kind of pumpkin, but starting out with a pie pumpkin, or sugar pumpkin is going to help you end up with more pumpkin from less work. Pie pumpkins are smaller, often a little squatier in shape, and if you are fortunate, labeled as a baking, pie, or sugar pumpkin. They have drier flesh, and thicker walls than a pumpkin you would use for decorating, or to make a jack o’lantern.

You also want to make sure the pumpkin you are going to cook is completely orange all over – that is how you will know it’s ripe, which will give you the best flavor. Pumpkins will actually keep a few months if you have a dry, cool place to put them, where there is no danger of them freezing, and generally speaking, they will have better flavor as they age. We only have a spot to keep them until the weather gets really cold though, so I got started on them already – otherwise I suddenly have a bunch of pumpkins that have to be cooked right now.

Begin by washing the pumpkin all over, and drying it off, so that it will not be slippery as you try to get it ready. Line a large, heavy baking sheet with parchment paper, and set the oven to about 400º. Knock the stem off the pumpkin by tapping it against the counter, or hit with something heavy, like a rolling pin. Throw the stem away.

Use a big chef’s knife, and cut the pumpkin in half from top to bottom, taking care not to get more than about 1/3 of the knife into the flesh, or it can kind of stuck in there. If that happens, just tap on the back of the knife firmly with the rolling pin, or even a hammer, to work it on through. Once it is in two halves, use a large spoon to scoop out all of the seeds [wash & dry them off and save them – next week we are going to do a roasted pumpkin seed recipe!]. lay the halves, cut side down on the parchment paper lined baking sheet. 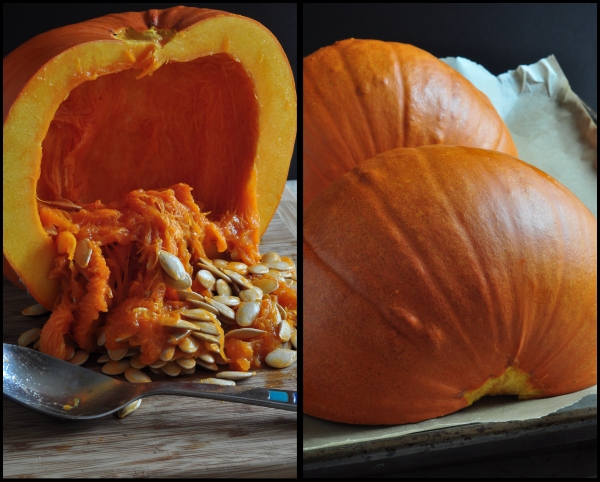 Bake the pumpkin for 45 minutes to an hour, until a sharp knife easily pierces the side. Bigger pumpkins may take longer, smaller ones less. Take the pan out of the oven, and carefully turn the halves over, to allow them to cool more quickly. You want them cool enough to handle comfortably, but the next part is easier if the pumpkin is still warmish.

Scoop out all the cooked pumpkin, making sure not to get any of the skin, which is not good to eat at all. There are a couple different ways to do this next part, which gets all of the pumpkin uniformly squished. I used my food mill this time, but you can also use a food processor, or even an immersion blender to do the job. You want to end up with a very smooth puree. 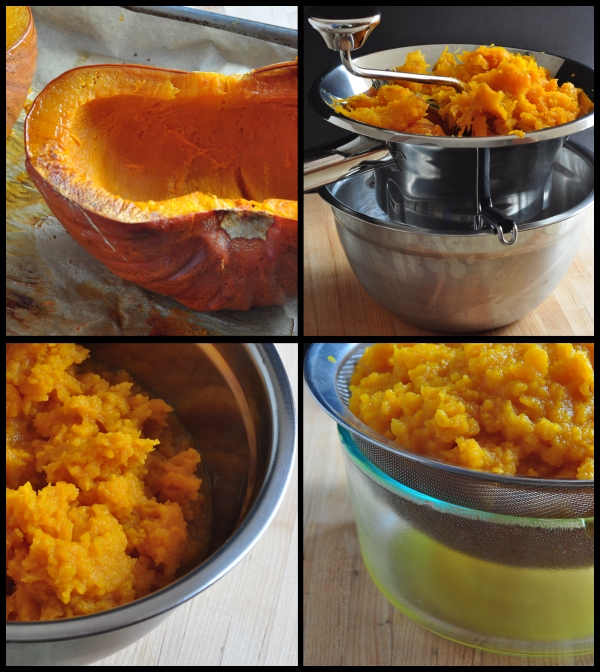 You will notice though, that what you have at this point, doesn’t really look very much like what you might be used to if you have bought canned pumpkin before. That’s because we still have a lot of liquid to get drained out of there. Put a large mesh strainer over a bowl that has a small enough circumference to keep the bottom of the strainer up off the bottom of the bowl – that is so the liquid has a place to collect.

Put the pureed pumpkin in the strainer. You can just let gravity do the work for you, though it takes awhile, and I am not patient enough for that. I lay a piece of plastic wrap over the pumpkin, place a small plate on top, and then weigh it down with some cans – that speeds things up quite a bit. It is still going to take at least an hour. In fact, after an hour, I take off the weights, and stir it around some, then put the plastic wrap, plate and cans back on top and leave it until it stops dripping completely. You really can’t get too much liquid out of there – I got about 2 cups from that one little pumpkin! 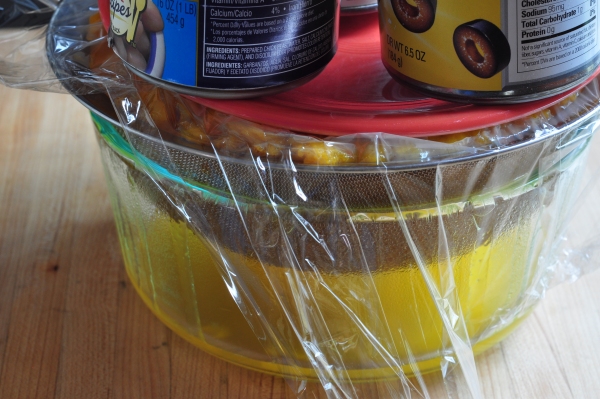 Don’t throw that liquid away either – if you have chickens, they will love it, as will your dog probably. I use it in smoothies a lot, or save it to use in a soup – it is really good in any kind of veggie or bean soup. 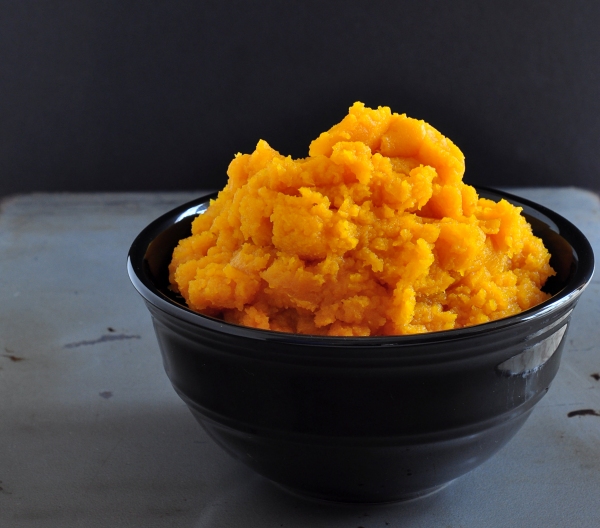 I freeze the pumpkin, and once it’s thawed, you can use it just the way you would any canned pumpkin. I do usually put it back in a mesh strainer for a few minutes, because there is always a little more liquid, and if you leave it in, your pie or whatever might end up on the watery side. I package it up in about 1 pound packages, in freezer bags, freezer containers, or saved yogurt containers [if using containers, press parchment paper, wax paper or plastic wrap right on the surface, to prevent freezer burn] – it will keep in the freezer for about a year. See – easy, right?

Save Print
How to Cook a Fresh Pumpkin 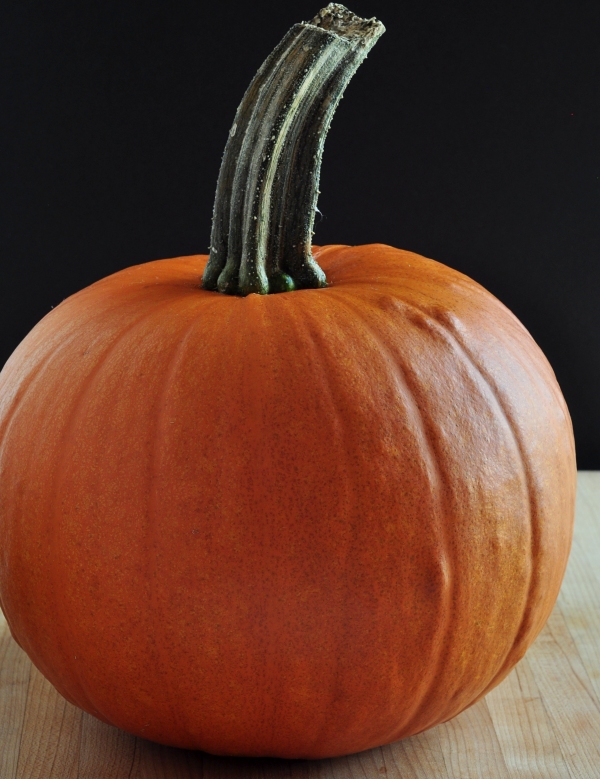 62 thoughts on “How to Cook a Fresh Pumpkin”