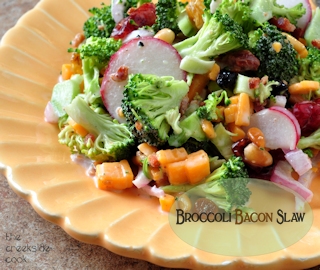 A salad made out of bacon? Is that like a dream come true or what? Hasn’t that been the trouble with salads all through the history of the world – they never had bacon in them? Broccoli Bacon Slaw has solved that problem.

Actually – I can’t claim to have solved it. I first had a version of this slaw probably 10 years ago, at a church supper. More recently, it has been present at meals with Larry’s family, because his Mom has been making it. My mother in law is not what you would call a great cook. She’s not, in fact, what she would call a great cook. Indifferent would be a better description I think. Mom grew up on a farm, and her mother was far more invested in getting 3 meals a day on the table for 8 people than she was in teaching anyone else to cook. So, Mom spent her time working on the farm, milking cows and driving tractors around. Then she got married, and before you could say “Bob’s your uncle”, she was making meals for 7 people herself. But, she has never felt like a competent cook. She suffers from a lot of self-doubt when it comes to the food that she makes. She says she doesn’t like to cook, but I really think she just doesn’t have any confidence about the whole thing. We tend to avoid things that make us feel un-confident, but that has never been possible for her, because she has all these hungry people showing up in the kitchen 3 times a day.

Then, every so often she will find something she likes to make, and that people seem to enjoy. So, she makes that thing a lot, which brings us back to the broccoli salad. The version that she makes is not half bad, though it does share one characteristic with the ones people brought [and still bring] to church suppers – it is too darned sweet. And no wonder, if you take a look at some of the recipes floating around the internet for it – holy empty sugar bowl, people! Up to a half a cup of white sugar in some recipes, along with raisins, which are very sweet and often balsamic vinegar which has a lot of sweet undertones as well. Still, that combination of flavors was interesting enough that I wasn’t willing to completely dismiss the idea of it altogether. So, I got to work. 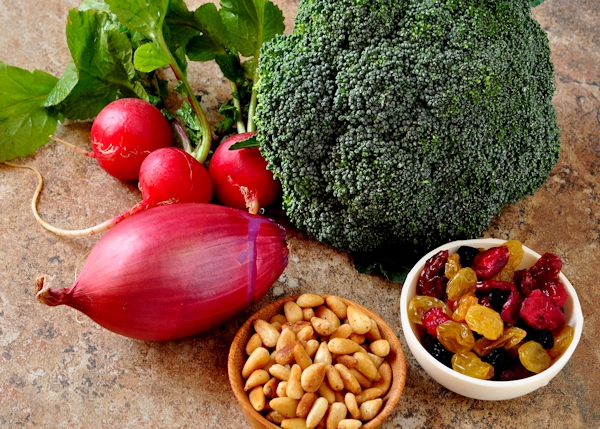 There are a few things about this that didn’t need changing – I’ve always liked the ones with raw broccoli best, and of course there would be no point to the whole thing without a good, big blast of salty, smokey bacon. I knew I didn’t want to use raisins, but I had a blend of dried berries I’ve picked up recently, with lots of nice tart cherries and blueberries in them, along with some golden raisins and cranberries. If I didn’t have that, I would likely use dried cranberries. They don’t add to the overwhelming sweetness, but are nicely fruity along with a nice touch of color. I didn’t have any sunflower seeds, but I just bought a bag of pine nuts, so I toasted up some of those to use. Finally, some nice spicy radishes to go with the red onions, and add another layer of contrast. 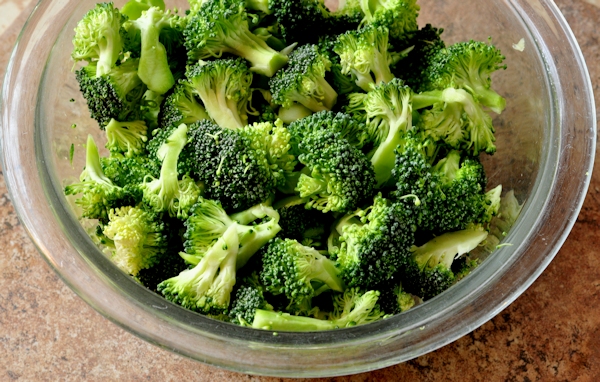 For company – and for blog posts I suppose – I like to separate the broccoli into pretty little florets. If it’s just us, and I’m in a hurry, I tend to just give it rough chop. 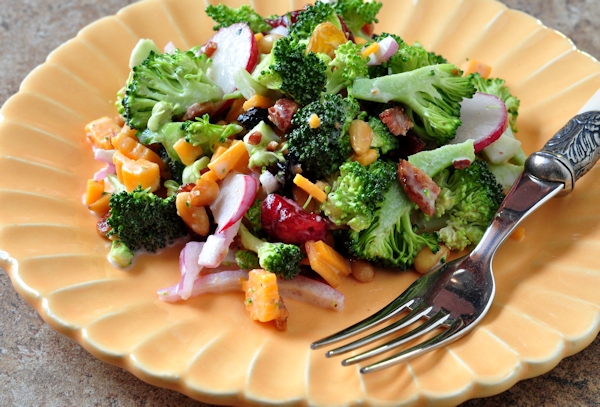 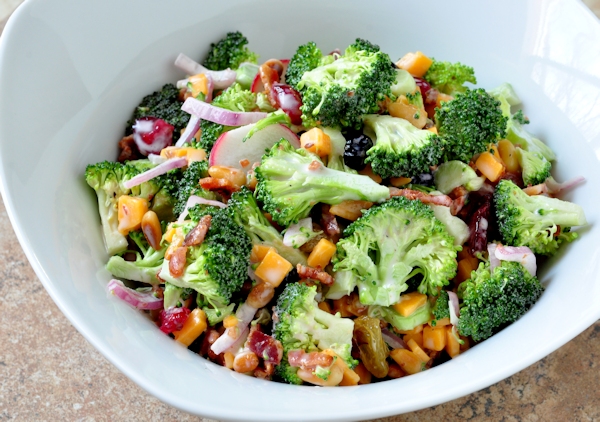