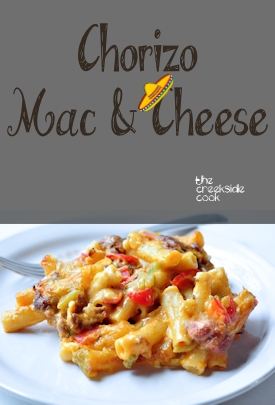 This time of year, I starting shifting how I cook. Cocktail hour on the porch requires a jacket and shoes, and something delectable baking in the oven is nice when we finally wander back into the house. We go from grilling and salads to something along the lines of comforting cheesy casseroles with combos of pasta, veggies and whatever protein is close to hand.

This past weekend, the protein was chorizo.

Chorizo is sausage, Spanish, Portuguese and Mexican in origin. There are different characteristics for each, but here in the states, the Mexican influenced variety is probably most common. Just a few years ago, it was impossible to find outside areas with a large Hispanic community, but that has changed, and now you can find it nearly anyplace.

It is spicy, but not searingly so, instead, having lots of nice warm flavors. It is particularly good in macaroni and cheese, where the creamy sauce creates a perfect balance of flavors. The Mexican variety of chorizo is usually not cooked in the casings, but is instead removed and crumbled up as it cooks. That certainly works well in this dish, because you hit a nice chunk of the spiciness in every bite. 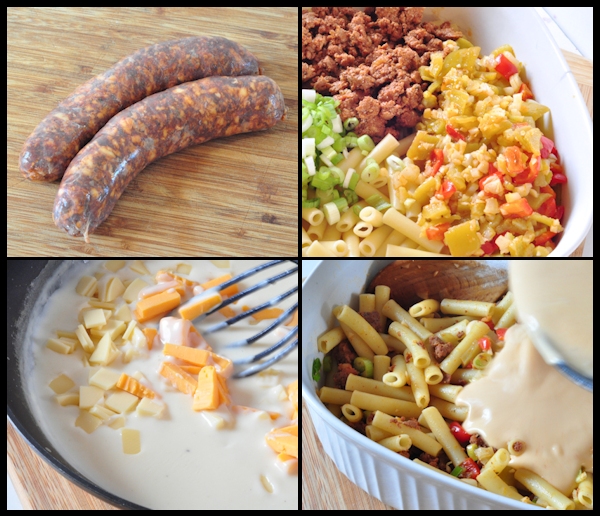 I have a particular fondness for macaroni and cheese, because it is the first meal  I ever remember making all on my own for our family. My Mom handed me her recipe, showed me where the ingredients were, and went back to tending one of the seemingly endless stream of little brothers who came long after my sister and me. [that is good grammar, which in this case is the opposite of birth order] In the intervening years, I have come up with a killer succession of macaroni and cheese variations, and this is one of my personal favorites.

Save Print
Chorizo Macaroni and Cheese
If you cannot find Chorizo, a nice spicy Italian sausage will serve as a good substitute.

Now Martha Stewart, who I am sure has minions to do her dishes, would have mixed this all up in another bowl and then poured it neatly into the casserole dish. I have no minions, so I mix it right in the casserole, and then use a damp towel to wipe off the sauce that ends up all over the edge, so that it doesn’t burn and become part of the molecular composition of the dish, entailing a bunch of scrubbing. Again with the no minions thing. 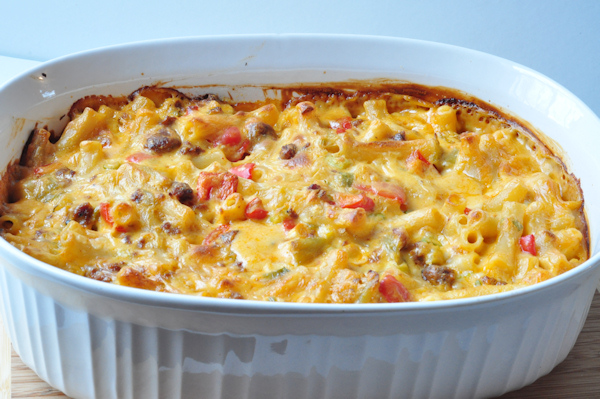 Serve along with some warm crusty bread, green salad and maybe steamed broccoli or roasted winter squash. You can fit more on your plate if it is by itself though. Just sayin’. 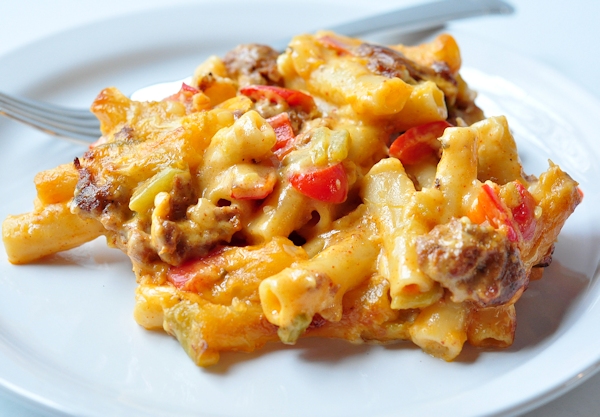 2 thoughts on “Chorizo Macaroni and Cheese”