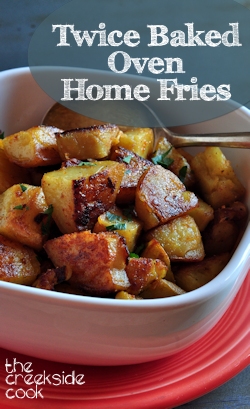 In my little hometown, back when we were in the last couple years of high school, and when we were all back home on college breaks, they still rolled up the streets by 7 or 8:00PM. If we got the munchies after dark, the only option was to run the 5 or so miles up the highway to “The Truckstop”, which never closed.

It was about the sort of place you might expect, with an interesting assortment of traffic coming off the highway, and a roughly equal number of locals. The truckers and other travelers were there for some refreshment, gas and to make a pit stop before heading back out on the road.

We were there for the home fries.

I’m not sure what it is – some primal instinct in the human body that craves home fries after you have been out having a little fun in a small town, maybe? You feel like you just can’t end the night without a shot of carbs and fat, so you all jump into someone’s car and race up the highway.

It didn’t hurt that they were about the cheapest thing on the menu. Money is ever an issue for teenagers – carbs and fat that are also really cheap is an awfully good thing.

But, mostly what they were was delicious. It took me awhile to get the method and the spices adjusted to get as close as possible to my memory of those home fries, but I think these are really close.

As you might imagine, in order to make a profit, truckstops and diners can’t afford to waste anything. Not food, or utilities or time. So, if you have the oven on to bake 25 or 30 potatoes for dinner, you may as well throw in another 25 to use for home fries, right? Then, you’ll to save some time later on as well, because it will only take a few minutes on the flat top to fry up the leftovers into crisp golden home fries when a crowd of hungry teenagers show up later on. That money and effort saving strategy resulted in truly wonderful home fries. 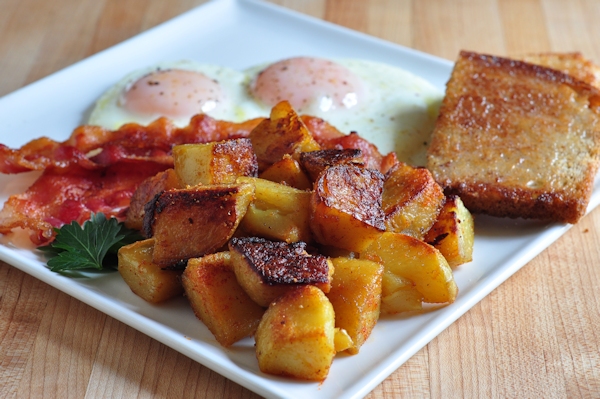 We aren’t running a truckstop around here, but we like to save time and money as much as anyone else, so using baked potatoes to make home fries makes a lot of sense. Another advantage? It takes less fat to crisp up a baked potato than it does one that starts out raw, so while they aren’t exactly diet food, they are going to be a bit leaner.

I like to use my big cast iron skillet to make these, but a heavy baking sheet will work nicely too. And it all works a lot better if the potatoes are completely cold when you get started, so I like to bake them a day or two prior and keep them in the fridge until I am ready to make breakfast.

Save Print
Twice Baked Oven Home Fries
This is method, as much as it is a recipe, so feel free to increase the amounts to suit the number of people you will be serving. The amounts given below will be enough for about 3 people. 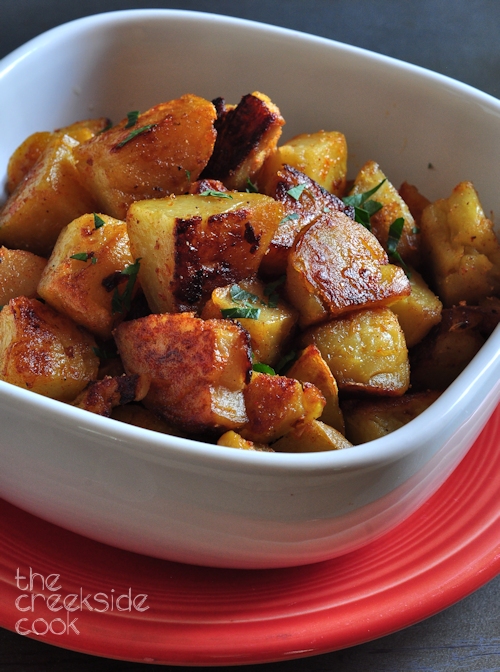 Author: Donalyn Ketchum
Recipe type: Breakfast or Side Dish
Serves: 3
Prep time:  10 mins
Cook time:  15 mins
Total time:  25 mins
Ingredients
Instructions
Notes
The potatoes can also be fried on top of the stove if you prefer - you can use an iron skillet or any other skillet or frying pan. Cook over medium high heat, and add more fat if necessary, to keep them from sticking.
3.2.2429
See? Perfectly crisp on the outside, with tender insides, and just the right amount of seasonings. It’s a good thing too – we live a lot further from that truck stop than I did back then! 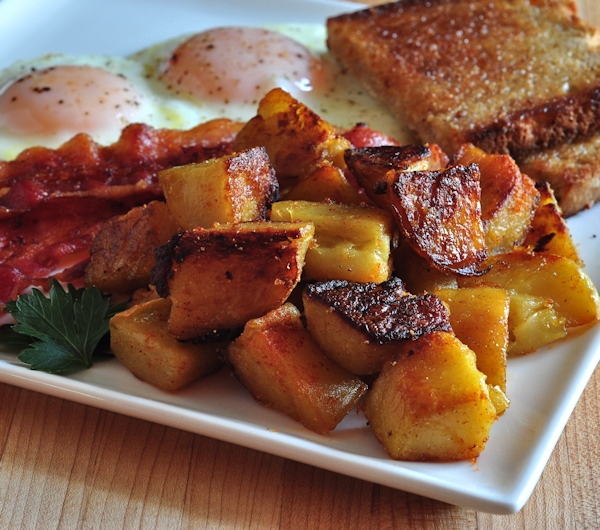